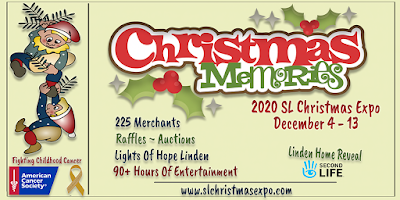 It’s beginning to look a lot like Christmas on the 12 Regions around the American Cancer Society virtual office in Second Life as Lindens and Moles join with Expo Elves, more than 225 Merchants and nearly 100 Live Performers putting the finishing touches on ‘Christmas Memories’, the 10th Annual SL Christmas Expo. The Expo, the largest holiday venue in Second Life, supports the Society and its fight against Childhood Cancer.

Ten Days of Holiday Shopping and Entertainment on Twelve Regions!

The 10 day event opens Friday December 4th through Sunday December 13th, features shopping entertainment and holiday activities including the annual Snowman Contest, Christmas Tree lots, Gachas, Raffles, Auctions and more.  Ride in Santa’s sleigh or pose for pictures on the Jolly Old Elf’s Lap.  Dance and enjoy live performances at the Holly Jolly Café, open 10am to 9pm daily or simply wander streets lined with shops decorated for the holidays.  It’s all at the Expo!

Linden Lab will reveal the next edition of the coveted Linden Home series at the Expo and will be providing several special One Of A Kind Auction items and special surprises.  SL Residents can:
•    Vote (by donation to a special ACS Christmas Expo Kiosk) for your favorite decorated Linden Home at the 3rd Annual Lights of Hope Home Decorating Contest
•    Bid for a 6 Month Premium Membership, including a Private Bellisseria lot (for 6 months) with your choice of Linden Home style*
(*Home styles maybe limited by lot location and availability)
•    Bid to Create a New Linden Last Name to be added to the list of choices for new members
•    Bid to Name a Future Bellisseria Region
•    Purchase a Limited Edition Linden Christmas Ornament, specially designed for the 2020 Expo and only available at the Expo.

And Just Announced!  Pictures with SANTA PATCH AND HIS ELVES!  A very special opportunity to pose for a picture with Linden’s Boss Elf himself on Wednesday December 9th from 1 to 3 pm in the main SL Christmas Expo region.

Take a chance to win Gift Cards Galore! Check out all of our Raffles, including the MEGA
Holiday Shopping Spree.  Bid on Great Prizes at the Silent Auctions! Watch our website for mere details!

Be sure to visit the Lights of Hope regions and vote for your favorite Holiday decorations provided by some of SL’s top home designers, Lindens and Moles and special guests. Vote often as you like! Vote for ALL Your Favorites by donating to the designated kiosks next to every home.

Don’t forget to mark your calendars for the Holidays of Hope Gala Ball, Sunday December 13th from 1 to 5 pm.  featuring performances by Fly, Tamara Hayden and music by T1Radio On Air personalities. Be sure to dress in your fanciest Holiday Formal Attire.

Since 2005 volunteers in Second Life have fund raised to support the American Cancer Society and its mission to Save Lives, Celebrate Lives and Lead The Fight For a World Without Cancer.  In this especially difficult year Society volunteers and the residents of Second Life have stepped up and helped raise more than $300,000 U.S. bringing the 15 year cumulative total to more than $3,970,000.  The SL Christmas Expo, which dedicates its proceeds to help fund Childhood Cancer research and support, has set its goal to bring that total to ONE BILLION LINDEN$ - $4,000,000! Join us at the Expo and help us finish this most trying of years on a positive note!

For Entertainment Schedules, Lists of Merchants, Landmarks and more information visit SLChristmasExpo.com or contact us at:  slchristmasexpo@slchristmasexpo.com