US Election Results: To Be Continued 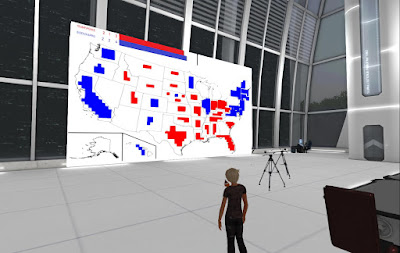 It was Election night last evening in Second Life. And at the Election Simulator (above) and other places last night many people gathered to see the results of the polls as they closed. Over time, the results slowly trickled in, and as the hours went on, the crowds thinned as people realized it would not be over soon and logged off to head to bed. As of 2AM SL time, the Electoral College score of declared states is 225 to 213 in favor of Democrat Biden. Several states have yet to be decided, and there are millions of mail-in ballots to read. President Trump has already declared victory. But the general consensus is figuring out the winner will take time.