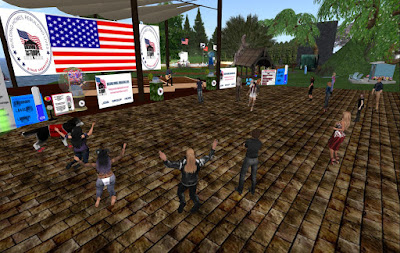 On Sunday November 22, Veterans Isle held it's monthly concert for charity. From 4 PM to about 9PM SL time, various performers played music for the crowd. The event was to raise money for Homes For Our Troops. The event was organized in part by guitarist Frets Nirvana.

Thanksgiving week Homes For Our Troops benefit …that is what we are doing tonight!  What are you doing??  Come on out and kick off a real Thanksgiving…by supporting those who have sacrificed all for our freedom.  We have a great lineup tonight …

DJ Waya Snowpaw started things off at 4PM, playing music on stage. At 5PM, the live performances started starting with Stratus Mactavish. 6PM, it was Zak Claxton's turn to entertain the crowd. Jessi Janic sang away at 7PM. Last but not least, Lark Bowen had the last hour at 8PM.

As each perfomer entertained the audience, people donated to two house-shaped kiosk on either side of the stage, "Thanks for the kind donation for Homes For Our Troops, rest assured your donation will go directly to HFOT to help our severely injured veterans ..." Once in a while, someone such as Frets challenged them to donate a certain amount within a certain time limit, promising to match it when met.

At the end of the event, 157,000 Linden dollars had been raised in the two kiosks.

Veterans Isle holds these benefit concerts once a month, usually on the last weekend of the month. But it was held early this month due to Thanksgiving.

For more information on Homes For Our Troops, read the website at https://www.hfotusa.org.