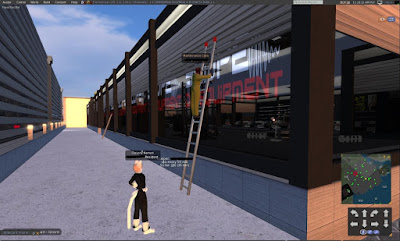 Now here's a sight I haven't seen in many years in Second Life.

Zipping around the mainland while trying out a Cloud data detector (more about that later), my curiosity drew me high above a sim to the platform above full of stores and hangouts, and I happened to notice what looked like an avatar cleaning a window. I thought it was the building owner, or maybe his/her assistant. But getting closer, I noticed the following display at the ladder:

It was a blast from the past, an actual camping spot!

When I first came to Second Life in 2006-2007, camping spots were very common. They were a means to boost traffic for a sim for just a few Lindens per avatar. Some sims had a lot of them, and they were in many different styles. In some, you just sat down. Others had you dancing in place. And some made it look like your avatar was performing some task such as sweeping or cleaning. There was even a website that listed camping spots and how much they paid.

Like many other things in Second Life, camping had it's fans and it's detractors. Many called it "gaming the system" as high traffic numbers attracted more people. One friend of mine commented "if you must camp, do so in a sim that isn't heavily populated." Supposedly some people would be on for hours to get just a few Lindens, which got some people wondering if these campers were better off taking an SL job or buying Linden dollars.

To me, it was a way to get a few extra Lindens while checking my email and maybe a few websites (I didn't usually have too many IMs at this time), usually at a spot that paid me a few Lindens every 10-15 minutes. But once the emails were done, I'd soon be gone. Why didn't I buy Linden dollars? After a talk with family once I got on Second Life, I decided not to put any real money into the virtual world for a while. Once I got a job at SL Newspaper, I pretty much stopped using camping spots.

It's hard to say exactly when camping for Linden dollars went downhill. I think by 2009, they had become an uncommon sight. Second Life was starting to change as money wasn't as easy to come by as in the early days. Although camping would remain, it would be in the form of chairs that would allow you a free item, usually in stores, for sitting on them for a half hour or so. A much better deal if you were trying to get Lindens for new clothes. Camping for Lindens, aside from a few rare locations such as this, pretty much became history.