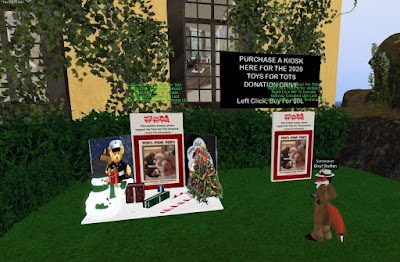 For Christmas, poor families often have a hard time getting presents to their kids. But there are charities that can help. Among them is Toys For Tots, an organization set up by the US Marine Reserves. Here in Second Life, Kickazz Shoutcast Stream Rental is doing a Toys For Tots drive. The company has pledged that all money donated will go to the charity, and is willing to match the first $1000 USD.

Those wanting to take part in the drive can head to Lorii Caproni Island and take copies of one or both of the kiosks there by "buying" it for zero Lindens. Set it where you want, then "when you set it out, you will be asked permission to take money from you. This is because of how the Kiosk works. A donation is made to the Kiosk, you are the Kiosk owner, the Donation goes to you, the amount donated is then transfered from you to ToysForTots Resident.  The exact amount donated, not a penny more or less."

The kiosk is copyable and transferable, so you can give friends copies of it to take part in the drive too. They are good until December 24, 6PM, when the charity drive comes to an end. Among the places taking part is the Happy Vixen beach club.