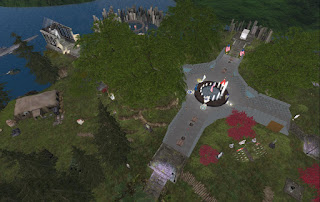 Veterans Day, known as Remembrance Day in Europe, will be coming soon. And the Second Life Veteran's Tribute is back in the virtual world. 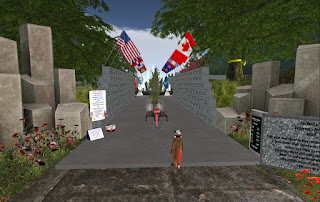 The Tribute opened on Halloween, and is scheduled to remain open until November 17. As before, there are a number of exhibits around, such as Battleship Beach and the Canadian Memorial. The largest of these is the Memorial Wall, which is made up of bricks representing a soldier whom served (or occasionally a group) either from a recent conflict or one from the past. A few, such as Lothi Aeon, have been residents of Second Life. 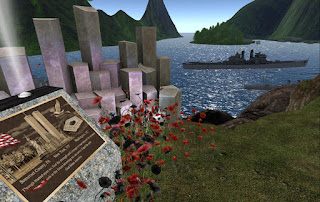 There is a stage, and so far there have been events most days the Tribute has been open. But there doesn't seem to be a set schedule, so to keep track of when musicians play and other announcements, one can join the SL Veteran’s Tribute group. At the stage was a sign for the Fearless Nation PTSD support group. People have also been invited to contribute to the Tribute's Flickr page, "Share your pictures with us we want to see it through your eyes!"