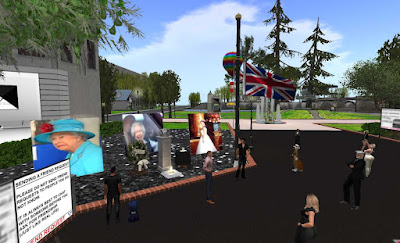 Queen Elizabeth of Great Britain died earlier today. At 96, she had been Queen for seventy years, one of the longest reigns in both British and world history. Her years had seen much from the Cold War and decolonialization to the Falklands War and later the Gulf and Iraq wars and the age of radio moving to television and then the Internet.

She wasn't expected to be queen when she was born, but her uncle was a bit of a playboy, and eventually abdicated. Her father had to overcome a stutter, of which a movie was made, "The King's Speech." He died of cancer when she was relatively young. Her relationship with her husband Prince Philip is believed to have been a happy one, though in her later years her sons and grandsons would be partially known by family drama that appeared frequently in the tabloids. For the most part, she was seen as the rock holding the family together.

The reaction in Second Life has already started. At London City, a memorial was set up. It included a British flag at half staff, along with a crown on a pedestal with a flame at the base, a guestbook with candles, and three pictures that gave a slide-show of Queen Elizabeth over the years.

The memorial is close to London City (75/218/23). Those with older computers may need to wait as when I dropped by, there were almost ninety people in the sim.
Rest in Peace.
Posted by Bixyl Shuftan at 3:02 PM