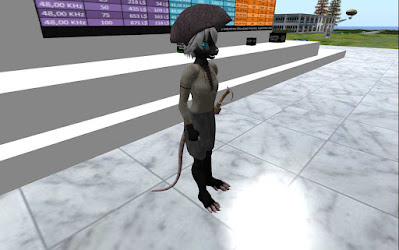 "Shiver me timbers! It be 'International Talk Like A Pirate Day' me hearties. So feel free ta speak th' way of th' brotherhood, dress up like a buccaneer or wench, or better yet, both. Check out yer groups fer pirate-themed goin's on. Arrrrrrrrr!"
Check out our article on "Pirate Speak."
*Update* While in Second Life, heard about a cool place in Bellisseria chat. 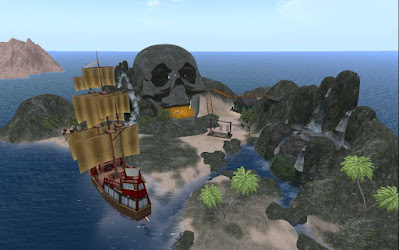 Michael (Bubblesort Triskaidekaphobia): This is outside Bellisseria, but I thought somebody here might know what this is... I found an island pirate cove, with a massive hoard of gold, off the NW coast of Satori The NW coast of Satori has a lot of cool islands to explore.  Anyway, when I click on the one treasure chest I got a gleaming pirates sword.  I got something similar when clicking on a treasure chest in some tunnels in a rainforest once... is this part of a bigger game that I don't know about, or is it just a cool thing the lindens leave lying around?  My notice said Naughty Mole gave it to me.

Checking out the island at Orlop (86,154,23), I found myself on an island with a huge skull in the center, filled with gold coins. Clicking on it, I got the golden sword that was being talked about, as well as a crown when clicking elsewhere. I got a script warning message stating the code was outdated. Oh well, it's an interesting momento for Pirate Day.
The island was created by the Moles of the  Department of Public Works.
Bixyl Shuftan
Posted by Bixyl Shuftan at 6:04 AM