Maps of Second Life can be misleading, especially when trying to show the entire world at once. Because of a few outlying regions (or agglomerations thereof) that are positioned extremely far from the Grid’s geographic center, Second Life can appear mostly empty despite its enormous size. 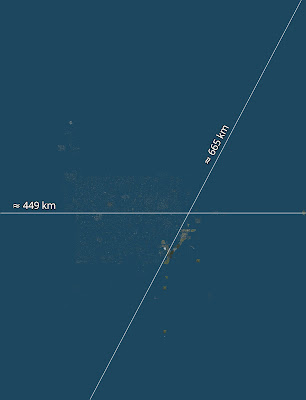 Distance can seem less important in a world where teleportation is possible—and often the only way to travel. Still, some trivia: The western- and easternmost Second Life regions are currently about 449 km apart, with roughly 665 km between the regions in the far north and south.
Erik Mondrian
Posted by Bixyl Shuftan at 6:02 AM