If you rent a place in Second Life through someone rather than getting it directly from Linden Lab, then chances are you know of Caspertech. Their rentboxes are a fairly common sight in numerous places here, including at the Sunweaver Estates where the Newser office makes it's home. Since 2018 with the closing of Hippo Technologies, they've clearly been the top seller of rental vendors. Things seem to have run smoothly with them. So it was a big surprise yesterday when Linden Lab announced they were acquiring them.

CasperTech has provided various business related services within Second Life for 13 years. Over that time, CaperTech has proudly provided continuous service for tens of thousands of Second Life businesses, and it has remained steadfast in its commitment to the merchants who have depended on those services.

This acquisition will ensure that all of the existing CasperTech services in Second Life will continue to operate without interruption into the foreseeable future, but it also opens up brand new opportunities to vastly improve the experience for our users as our next step in the CasperTech and Second Life journey.

You can expect to see the same great services that you know and love continue on, with all of the same functionality you enjoy today, but with closer integration into the Second Life ecosystem – and as such, an even more reliable and convenient experience.

The news sparked more than a few questions and some fears among some residents, both those on the forum thread to discuss the matter, as well as conversations with people I had that day. A few were expecting Linden Lab to gouge them to the point they'd have to give up some of their land.
Shortly afterwards, there was a special episode of Lab Gab to help explain things. In short, Caspervend is not in trouble, but the owner had other reasons to sell. 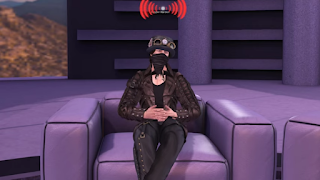 Caspertech is owned by Casper Warden, and he and Patch Linden were interviewed by Strawberry Linden. Casper stated he came to Second Life in 2006, was asked to by people in his real-life job to take a look at it. Worked on promotional material for the company at first. But was soon making his own items. Caspertech as a Second Life company has been around for 13 years. Casper originally created the vendor system in 2009 for his own personal use as he didn't like some of the ways what was on the market worked, "they were script-heavy, and I didn't like the way that the vendors scrolled through the products." But he soon realized people were more interested in his vendors than what he was selling, "In hindsight, I guess I shouldn't have been too surprised by that." So he soon launched version one to the public. While he didn't do an ad campaign for it, word spread by word of mouth and started becoming popular, "and we just continued to expand to meet customer needs." Casper does make other items, such as a security orb and a product update system, though his vendors continue to be his "bread and butter."
Patch called himself "a bit of a fan" about Casper's products, and had been using them not just for himself, but Linden Lab work, calling it "an awesome system." He would say the talks about Linden Lab getting Caspertech started, "a little while back now," with he and Casper talking on various subjects, and eventually came to the idea of the Lab taking the system and intigrating it with Second Life. This way, Patch stated, this would mean the long-term stability of the vendor system while under the Lab there would be more resources available to improve on it. So Patch asked him about the idea, "and well, here we are." Patch went on to say Caspertech's technology, "will bring a lot of capabilities ... in the future."

Strawberry asked what residents can expect. Casper answered that customer services will continue, "It's really critical to us that our customers don't get disrupted." He went on to say that he was still basically in charge of Caspertech's day to day operations, saying the big difference was that they now had, "the support and resources of Linden Lab behind us," reminding that other companies offering rental vendors had closed down over the years, "now our customers can be assured that their Caspertech services aren't just going to suddenly disappear." Of the future, he stated that he saw "plenty of exciting opportunities" to improve the vendor system, saying residents can expect "significant" improvements. Patch stated that in the deal, the Lab "would not interrupt or change what you know and love about the Casper products today. They will continue for the foreseeable future just as they are now. ... the goal is to ... give Second Life residents the tools they need to be successful in what they do."

Casper described himself as mainly a software engineer, and stated that as his business expended, "I found increasingly less and less time on my hands to really spend on the code," and that "many requested features have kind of sat on the back burner. ... this move give me an opportunity to really get back to what I love and what I'm good at," developing his rental vendors and other products of his. He would go on to say he'll still be online, and around in group chat, "monitoring and helping to keep everything running," and thanked his support staff, "who have already kept the show running all these years."

Patch stated they would soon start working with Casper to "transition the service" to the Lab, saying the goal was to make it smooth to the point it wouldn't be noticed by anyone. And after that, Casper would presumable have more time to work on the system's new features.
In the forums, someone would ask Casper if he was in some kind of financial trouble, and he would answer, "No! We've been profitable since the day we launched. But the amount that one guy (me) can handle is limited, and as CT grew I found myself with a massive challenge and not enough time to improve the service. Now I can! *yay*" There were numerous other comments. Some were cautious, some were optimistic, some were a little of both, feeling the Lab wasn't out to gouge them but weren't so sure about the promised improvements. There were a few comparisons to Linden Lab's acquisition of Xstreet, which would eventually become Second Life's Marketplace. One would say this was no surprise as she felt Caspervend had gotten "too big to fail" for Second Life.
While a major development, for now it appears little will change as far as daily life in Second Life goes. Hopefully Casper will soon come up with the improvements he says he was requested to make, but hadn't the time to develop them. For now, we can only wait and see.
Bixyl Shuftan
Posted by Bixyl Shuftan at 11:01 AM