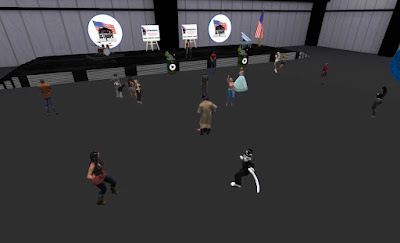 On Wednesday September 7, Veterans Isle had it's monthly benefit concert for Homes For Our Troops. The event happened from 4PM to 9PM SL time. The event took place in the USMVC Special Events hangar, high above the sim. One DJ and several performers took part. The show was organized in part by Frets Nirvana. 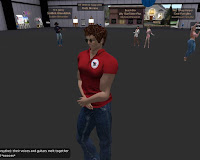 Here we go folks!  Our kickoff for this fall’s benefits fro Homes For Our Troops starts tonight.  Chapman Zane has just done an outrageous 2 hour performance!!.  Up next is Marqs Desade  And then after that …is Grace Loudon and Wes West duel streaming….
Come on out and help us meet our goal and help an extremely injured veteran through Homes For Our Troops. ...come on out ...but if you can't ...and want to help ...send a donation and I will put it in for ya!
As the event went on, people in the audience donated to two house-shaped kiosks on either side of the stage. Occasionally Frets or someone else would challenge the people to donate a certain amount more, then it would be matched, "Folks, let's hit that 100k by half time, and I will put that 5k in!" During the show, he announced, "Mavenn is not well ...sore throat and cannot sing." So Chapman Zane did a two hour performance instead of one, "Big time round of applause for Chap !!!"

During the show, there were also a few inevitable typos, "Check that, 47800 now, only need 2200 to hit that 509k! ... 50k! (laughter) I wish 509k!"
Frets would also remind people about the quality of the organization the money was going to, "Folks, HFOT is a 4 star charity according to Charity Navigator, (and) are considered a top rated Veteran and Military Charity. Nearly 90 cents of every dollar donated to HFOT goes directly towards the building program! Since inception, HFOT has built 330 homes. (as of 1/01/2022). HFOT currently has approximately 72 projects in the pipeline. ... HFOT builds homes in any state in the country where the Veterans choose to rebuild their lives.  They have currently built in 46 states.  Veterans will typically choose to settle near family and friends, close to medical services and warmer climates.  Prosthetics can easily freeze and the cold weather itself can reap havoc on them."
Near the end of the event, Frets put in a few thousand more, making the final total an even 150,000 Linden dollars, or about $600 USD.
To learn more about Homes for Our Troops, check https://www.hfotusa.org .
Bixyl Shuftan
Posted by Bixyl Shuftan at 9:01 AM