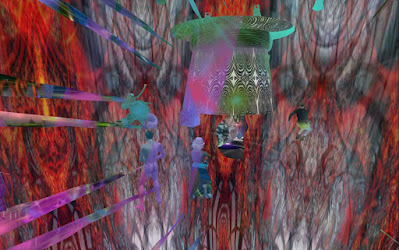 Saturday September 24 was the real-life birthday of one of Second Life's more unique performers: Tuna Oddfellow. So he celebrated with an impromptu performance of his Odd Ball.
Tuna Oddfellow is a magician in real life, "Fish the Magish" Fishman. He got attention during Second Life's heyday in 2007 when NBC did a "Most Talented Avatar" competition. "I've got a mission to bring a little magic to everyone's day," he told the reporter then. And magic he has delivered, eventually coming up with the Odd Ball.

For those who have yet to experience his show, it's a bit like dancing inside a kaleidoscope, or as someone put it, like a drug "trip" without the nasty side-effects. A few people have gotten headaches from it. Some feel "trippy," feeling unusually relaxed or euphoric. Others feel it just looks cool.
Tuna at this time does not have a regular showing of the Odd Ball, instead having occasional performances, announcing to those on his contact list when he's about to start.

In my opinion, this is a unique show that no one else has done anything else like it, and like many other things in Second Life needs to be seen at least once.
For more information, read Penny Shuftan's 2017 interview.
Correction: The date was orginaly a day off, and was later corrected.
Bixyl Shuftan
Posted by Bixyl Shuftan at 6:01 AM