Azeroth Gets Thrown to the Wolves With "Cataclysm" 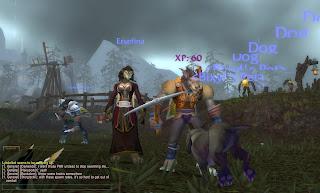 If Second Life has been minus a few people these days, the reason is likely to be World of Warcraft.

With the latest expansion on the shelves of stores, "Cataclysm," players have been buying them up, including yours truly. There's a new profession, able to fly in the "classic" areas, new zones, and of course two new player races. One are the goblins, and the other the Worgen, wolf-like beings.

Checking out the Worgen starting area, Gilneas, the place was packed with large numbers of other players as the expansion had only recently been available for sale. The players went through the story of the characters' country under seige from attacks by the cursed beings, only to get bitten while defending the place and eventually transform as well. Fortunetly a serum is developed to allow the Worgen to regain self-control, but it isn't long before a new threat moves in.

Worgen can be any character class, except paladins and shamans. This includes druids, unavailable to normal humans, and hunters, which can be an amusing sight as Worgen hunters fight not so much with claws but with guns and their pet dogs. They can boost their speed temporarily, and are a bit more likely to score critical hits, as well as more resistant to natural and shadow damage.

And the dark Victorian/Steampunk looks and the Cockeny accents add to the atmosphere (and sometimes the humor).

I'll be checking out other features soon, but for now, me and other WoWers are having fun running with the wolves, and enjoying every moment of it.

(Runs off with a huge bone as an Undead calls out "Come back with my leg!")