The “Winter Wonderland Snowglobe” at the Fitzgeralnd

Some Nighclubs hold special Winter events. One decided to build a room-sized snowglobe. Drakken Calhoun of “The Fitzgerald” told me about the “Winter Wonderland” those visiting his club could walk into.

“When you come into the club, “Drakken told me, “you will see doors to your left. Open the door, touch the wall inside, and it will take you on a magical winter trip. Please stop by, and we hope you like it. Winter has arrived at the afterhours at the Fitzgerald, stop and have a look at our Winter Wonderland, and dance in our Giant Snowglobe.”

The Fitzgerald itself is, as Drakken describes it, “a 1940’s style ballroom and lounge” one can “bring your freinds and go back in time. ... It’s retro decor with deep reds and hints at jazz-age frivolity make it a welcoming and lighthearted date destination.” The ground floor has a ballroom for music and dancing, and for more laid back events and happenings, there’s a small coffee shop on the second floor, called the “Morning Coffee Lounge.” 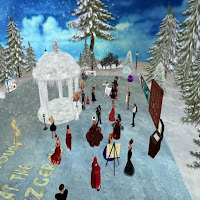 Currently the crew of the club is on holiday break with no events after New Years, though Drakken would sometimes leave his avatar dressed at Santa Claus at the sim, often Away From Keyboard, “Would you believe how many people took pictures at the Fitzgerald thinking I was only just the traveling Santa (laughter). I spend from December 1st to December 26th as Santa every year.” Events will resume after the holidays are over, their “Martini Hour Venues” and Sunday morning poetry readings at 10 AM, “and coming soon is the Open Mike Comedy Night,” which is in the lounge upstairs.

The Fitzgerald is at Unsung Village at (54, 91, 22). The Snowglobe will remain until winter ends. Drakken plans to put something else in it's place, but isn't saying what it will be.