On Tuesday December 7, the Ohau sim had a service at their USS Arizona Memorial. I was unable to attend the event, but later on I did meet up with the event manager, Twstd Ruggles. 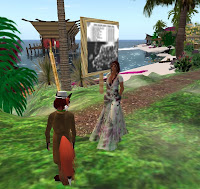 “Aloha” she greeted me as I ported in next to the memorial, the names of those who died at the battleship’s sinking being announced. A lei rezzer, when touched, would throw a wreath of flowers into the water, stained a bit from oil bubbling up from the image of the sunken ship, calling out, “Thank you for remembering the fallen soldiers of Pearl Harbor. Your lei has been launched into the sea in remembrance.”

“It was really a beautiful service.” Twstd told me, and shared a few photos, though was sorry some people only appeared as clouds, including singer Ichie Kamiche, “she sang three songs, one patriotic, and two Hawaiian.” 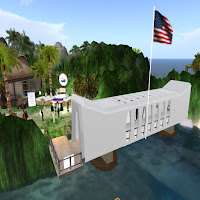 “I gave an opening speech. I almost couldn't speak because I was choked up. But I got through it. This place is special to me.” Before her speech, she had sung “America the Beautiful,” and played President Franklin D. Roosevelt’s “Day of Infamy” speech. Besides Ichie’s singing, there were also hula dance presentations, and a prayer from a chaplain.

Besides myself, there was one other visitor, “my father in law was a survivor of Pearl Harbor.”

“Thanks for stopping by.”