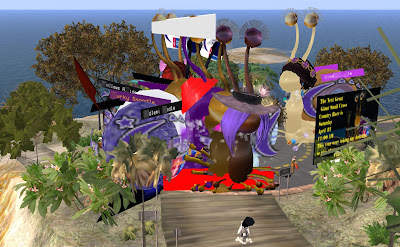 On Saturday April 27th, this month's Cross-Country Giant Snail Race was held on the Second Life Mainland. Taking place on the continent sometimes called Heterocera or Hererocera Atol, the race began in the Fillip sim in the north at a little after 11AM SL time, the course going west along the coast, and then south and east crossing a few dozen sims. It ended after about 40 minutes in Calleta, near the Hobo Railroad Infohub. Tindallia Soothsayer won, with Alden Cortes described as close behind.

The rankings of those finishing are as follows: 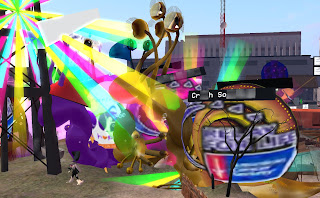 The recording of the race will be shown on Treet.tv in about "a week or two." But the one of last year's Fillip-Calleta event can be seen.

The Cross-Country Snail Races are held every month during the Relay For Life fundraising season by RacerX Gullwing and his team, in addition to residents participating in the event. Donations go the Giant Snail Racing Team, which has raised over 48,000 Lindens this year.


*Update* The video of the race is now up: Click Here.