Back to Minecraft Part 2 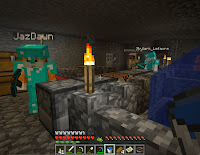 Earlier in April, we reported on the continued activity in the Angels Village Minecraft server. Since then, the activity hasn't stopped but continued, such as the finishing of a long-distance tunnel. So here's a progress report on the digs in Nydia Tungsten's Minecraft realm.

Read more in Extra.
Posted by Bixyl Shuftan at 6:05 AM