Almost lost in the Easter celebrations and Relay For Life fundraising, Frets Nirvana's monthly Wounded Warrior Bennefit continued to do as well as ever. The event took place over four hours with four singers, going from 5 PM to about 9PM SL time (Midnight EST). In a post, he stated that 206,000 Lindens were raised. 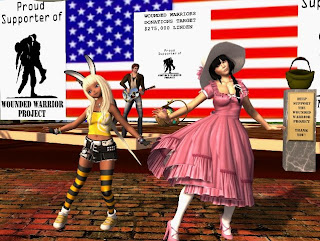 The Wounded Warrior Project is a nonprofit group devoted to "honor and empower wounded warriors" of the US Military. The Project's objective is to provide tangible support for the severely wounded and help them on the road to healing, both physically and mentally." Brought into Second Life, for many months the events were held at Patriot Island before they were moved to Veterans Isle last month.

We raised 206k Linden last night at the Wounded Warriors benefit. Thanks to all the great performers Pondman Haalan, TerryLynn Melody and Max Kleene and thanks to all who support ..especially Dahlea Milena! We have also raised a 211k Linden through the USO tour effort that Don Guapo and Checkers Firelight work hard on. So for March we will be sending over $1600 US to the Wounded Warriors project! Thanks to all in Second Life!

And that's no April Fool.