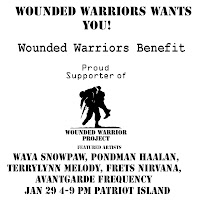 On Sunday April 28th, Veterans Isle hosted the monthly fundraiser in Second Life for the Wounded Warrior Project. The event was organized by singer Frets Nirvana, and took place from about 5PM SL time to a little past 9PM.

In the two helmet kiosks a total of 197,000 Lindens had been collected.

To learn more about the Wounded Warriors Project visit https://www.woundedwarriorproject.org/component/option,com_frontpage/Itemid,840/
Posted by Bixyl Shuftan at 6:01 AM