Draxtor Despres came out with a video of the grounds for the upcoming Relay For Life event, the Fantasy Faire (click here if you can't see it below).

On Saturday April 20th over 140 merchants will start selling their wares to thousands of avatars, fundraising for Relay for Life! Hop on into the virtual world next week and be mesmerized by immersive environments created by the best artists in Second Life. Every dollar spent goes to American Cancer Society like nothing you have seen... 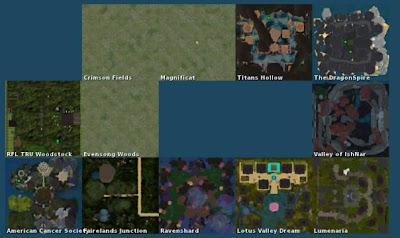 Daniel Voyager had a few things to say about the Faire as well, including this screenshot of the twelve sims making up the fairegrounds.

The Fantasy Faire, the fifth one for the Relay, runs from Saturday April 20 to Sunday April 28.

Read more about the Faire at http://fantasyfairesl.wordpress.com/.
Posted by Bixyl Shuftan at 6:00 AM