Earlier this month, a warning was sounded in the Angels and Sunweaver groups. Brandi Streusel, one of the more popular members, noted for her "Brandi's Panties" line of outfits, had been hacked. An amount of Lindens were swiped from her account, a number of items on her were compromised, and the most visible example of what happened, Castle Mousehold was wrecked. The possessed avatar deleted about half the place. 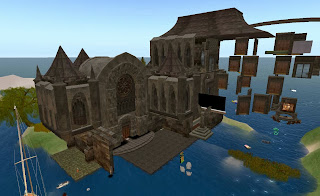 As soon as she realized what was happening, Nydia sounded the alarm in the Sunweaver and Angel groups, in addition to several other groups, urging the account be barred from their places until it was confirmed she was back. And above all, not to click on links she was sending out.

As you all probably know by now, Brandi's account has been hacked, I have banned her where I could, but not before the castle was destroyed, right now...our home is gone. I have asked Rita for a roll back that should fix that, as for when we get Brandi back ….I don't know.

Unfortunately, someone else did click on a link sent by the hacker before word got around, Dusk Griswold. So word went out about the second hacked account, warning that if they clicked on anything sent by them, "you need to change all your passwords NOW, and anything your account is linked to."

If  you are ever sent a website link that tries to be something from Second Life.  Make sure that it is actually from secondlife.com

This   http://markettplacefree.altervista.org/index.html   IS NOT from Second life.  Never click on a link, or log into a page that isn't an Actual Second Life web page.  If you're not sure,, be safe and just don't.

Eventually, Brandi and Dusk were back. Linden Lab didn't give Brandi the Lindens she lost back, and she had to go through her inventory to examine what might have been compromised. But the sim rollback was carried out and the castle restored. Dusk reported the hackers tried to rob her, but the Lab took care of the details.

Just wanted to let everyone know LL has restored my account after the hacking incident. The person first tried taking all my Lindens, then buying Lindens. They did succeed in making a few small transactions on Paypal, but they have been notified, and I should get credit for those. The Lindens they took from me here have been restored, and all my passwords have been changed.

And so the hackers were stopped. Thanks to the community spreading the word, no more found themselves locked out of their accounts. But this was a warning to all about "illicit links and the problems they cause."

" …. people will understand the peril they put themselves in if they don't take 5 seconds to simply check links. They can lose everything and not even be here for it, everything including their own financial holdings. A hacker if they can get your account and log in, they can get access to your personal money line account numbers, and that leads to things far far worse than this world. I know... it's happened to me. I fought tooth and nail to get everything back … "

Words of warning to listen to. And of course, a reminder if one suspects anything funny, don't hesitate to change your password.