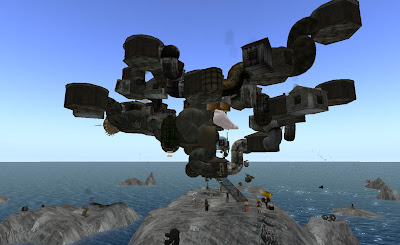 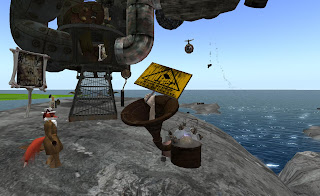 In the LEA20 sim, there's a build by Blotto Epsilon called "Bogon Flux."

The Linden Lab Destination Guide described the structure as "a scrap-metal steampunk structure that defies gravity." It certainly looks flimsy, standing on two clawed metal feet which are resting on a couple women's pink bicycles. Next to a metal gangplank up to the build, a sign invites people to take a crash helmet. There's also a sign which is supposed to how to describe going about while inside. On the ground is a small book that provides a little story about how the Bogon Flux came to be. 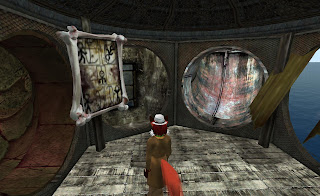 Once inside, one will find tubes going around in a few directions. One can either fly up them, or touch the rim to "sit" on the tube and be taken up to the junction where it leads to. Some directions have a window or some other feature like a fishtank or a giant hand instead of a tube. As you go up, some tubes will take you back down, and there are occasional dead ends as you reach one end of the Flux.

The Destitation Guide tells you to "Beware of falling parts." And indeed every 25 minutes the structure comes apart and anyone inside drops to the ground, or water.  The Flux then reassembles itself, but in a random new pattern. Chances are, you won't find it the same way twice. 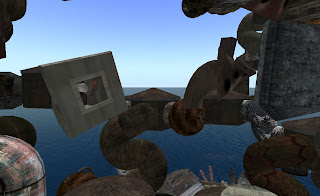 Around the Flux are eyeball-like things, some flying around via propellers. There was also some other junk flying around and a small shack in the air just big enough for a couple chairs and a table, with a small ladder leading up to it.