Tales From Podex: The Heist

He'd get them this time.

Cooper thought he'd lost them for good after they moved. Just why they up and went to another location, he never knew why. Maybe they were afraid he was finally about to pull off the perfect plan that would result in him walking away with all those Lindens. Well, finally he found it. 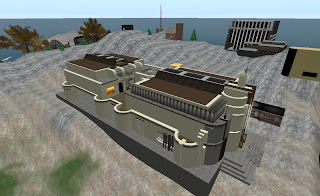 He thought about what plan to use this time on them, then he found out the building was different this time. Besides the bank, the place housed an art collection. So with that in mind, he decided to take a different strategy: swipe the art. Oh, he'd have to go through the trouble of having to fence the goods, but maybe he'd get lucky in finding someone willing to pay a good amount. And while it might not be robbing the vault, it would be finally pulling one over against the bank that had humiliated him for so long.

Cooper dropped by on a weekend, in which he figured the tellers wouldn't be there. He sneaked around to the side, threw a rope and hook up to the second floor, and made his way up. Well, at least he thought it was the second floor. He quickly noticed from the level of flooring just in front of him that he had ended up climbing up to a third level! He grumbled at his luck, having made twice the strenuous effort he needed to, but went about scouting around for valuables to take. 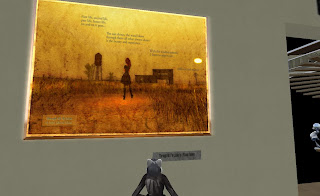 The first thing he saw was a contraption, some kind of waterwheel. Not recognizing anything of obvious great value elsewhere on the third floor, he made his way  over the side down to the second level. He noticed a sign over a doorway to inside, "Polish Art." But a quick glance inside showed lots of sculpture and modern art. Perhaps a bit heavy for a master thief like himself to carry.

But there were a couple paintings nearby out in the open, ripe for the taking. One was of a river and mountain range. The next was of a wheatfield with a girl looking at a water tower and building. There was also some narration.

First life, second life,
past life, future life,
on and on it goes …

The sun shines, the wind blows
through them all what always shows
is the beauty and experience …

With the wisdom gained,
I learn to appreciate … 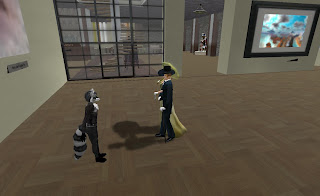 The work was titled "Through All My Lives," by Allison Selene. The words of philosophy were lost on Cooper. But he had the idea this would be a picture more recognizable as unique, and perhaps worth less money to buyers who'd have to keep such a work from public view. But there was a third painting. He went over, and began looking it over.

Surprised, Cooper turned, and found himself face to face with a wealthy-looking couple. Out on the street, he might simply have followed them to their home and staked it out to burgle when they were absent. But taken by surprise like this, his reaction was to back away, "Um, yes, fine art. Gotta go!"

He slipped into the doorway, but found himself face to face with a woman and her pet dog, "Yap! Yap! Yap!" That was enough. Clumsy then sprinted back out, over to the edge, and jumped over the wall. He made a hard landing, "Oooof!" While able to get up, he could only limp away. 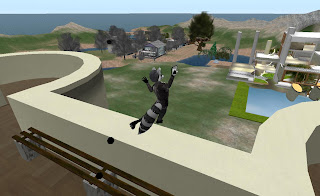 As it turned out, Podex was open that day, as it is 24 hours a day seven days a week. Hearing about the intruder with the mask of dark fur around his eyes, the tellers called the police. As "Clumsy Cooper" hadn't actually laid a hand on anything, for once he hadn't committed a crime. But the SLPD is still looking for him for previous charges of attempted griefing.