This Week at the Sunweaver and Angels Clubs 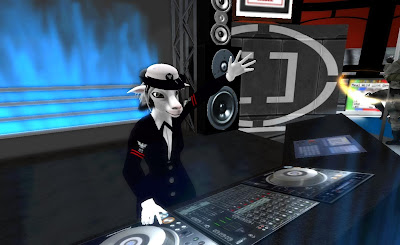 DJ Cynthia Farshore at Club Zero Gavity's Military Night. Earlier in the week, the club had a Police and Firefighter's theme in honor of the first responders on Sept 11th, and then it was the turn for those in the armed forces. Cynthia played a number of military-themed songs, starting with one composed at the time of the American Revolution and a few from the Civil War such as "Goober Peas." There were a few from the Second World War, such as "Der Fuhrer's Face." And later in the party were ones from the "War of Terror," such as "Al Qaeda," a parody sung to the tune of "Elvira," and "Courtesy of the Red White and Blue."

Oh, justice will be served and the battle will rage:
This big dog will fight when you rattle his cage.
An' you'll be sorry that you messed with the U.S. of A.
'Cos we'll put a boot in your a**,  it's the American way. 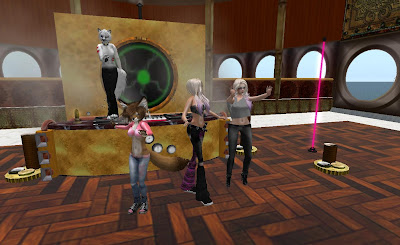 After some months in hiatus, Club Little Dove was back in business. The Zeppelin club flies high over Sunweaver Bay, offering a few events a week in the evening, usually at 8PM, and some games between events. Here, DJ Yulia (center) performs with a few of the crowd around her. 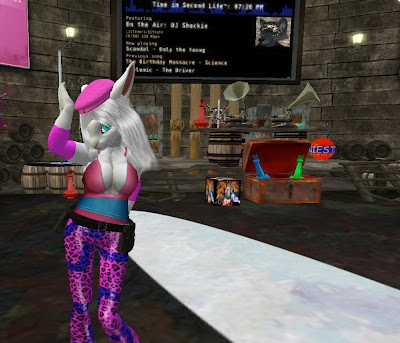 In contrast to Club Zero Gravity, Club Cutlass' events this week were more lighthearted. Here's club owner Jenni Greenfield as a "Pink Beret" bunny at the "Pretty in Pink" party, which naturally had mostly females dressing in theme. DJ Shockwave was performing that night. Because a few males dressed in theme, we couldn't show a pic of the crowd without embarrassing them.