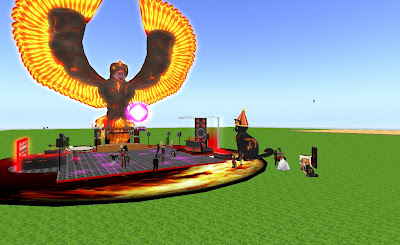 September 4 was the third anniversary of Team Firestorm, then called Team Phoenix. And to celebrate, the group held a little party at it's "Phoenix Firestorm Support" sim.

Finding the SURL on Daniel Voyager's webpage, I headed over. But arrived at a spot far away from where the party was on a platform over 2700 meters in the air. Getting there took a few minutes. When I arrived, none of the Firestorm staff were there, although Daniel himself was. 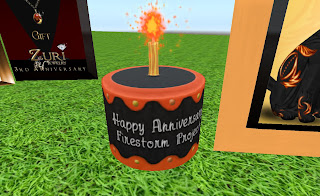 In front of the Firestorm Phoenix was a dance floor where a few were dancing. Nearby were a few gifts people could pick up. These were a wreath of flowers, a Firestorm logo necklace, and a "Firekitty" breedable cat. Next to them was a model of a birthday cake.

The original members of Team Firestorm were part of the team behind the first third-party viewer to gain popularity: the Emerald Viewer. Known as Modular Systems, they were very popular for a while, rivaling the official viewer in use. Then in August 2010 one of the team resigned, accusing teammates of abuses. This was followed days later by a Denial of Service attack on the website of one of Emerald's critics that was traced to computers using Emerald Viewers at the time. Linden Lab took Emerald down from it's list of approved viewers and gave it's team a list of conditions to reapply. But among the conditions was the resignation of a few key members, and one refused to do so. The team then split apart, Jessica Lyon leading the breakaway members. They would form a new team, and on Sept 4, 2010 announced the launch of the Phoenix Viewer. Days later, Emerald was no longer useable, and Phoenix was on Linden Lab's list of approved viewers. Two key members of Emerald's staff would be banned from Second Life, and a third disappearing. They were last heard of working on a minor virtual world platform known for a small adult grid, and almost nothing has been heard of them since.

Things settled down for Phoenix after it's story begining, and the viewer and it's team leader Jessica became quite popular. Phoenix soon surpassed the official viewers in popularity. Keeping up with technical developments, the team created a new viewer, Firestorm. They continued to update the older Phoenix for a while, but eventually Jessica decided it was becoming too difficult and it was time to move on. Despite that Phoenix is no longer supported, a number of loyal fans persist on using it. Firestorm persists as being more popular than the Linden viewers.

More pictures of the event can be seen on Daniel Voyager's Flickr.