The "Odd Ball" Closes in Second Life Due to New ToS 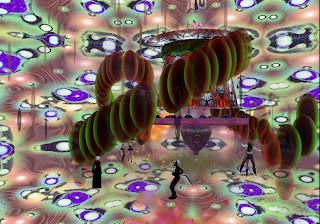 Shava Nerad, known as Shava Suntzu in Second Life, made a post on Google Plus on Monday Sept 23, which Tuna Oddfellow shared on Facebook. It seems due to Linden Lab's new Terms of Service concerning ownership of content rights, Oddfellow Studios, and therefore the Odd Ball, has closed the curtain on it's performances, possibly for good in Second Life.

"Dear Linden Lab -- it's been a nice eight years," her post begins, "but you just broke the social contract with me as a creator in Second Life BIG TIME." Then listed the new part of the Terms of Service in question.


This means that not only +Tuna Oddfellow's art, but the way we present it and the methods of the Odd Ball and the Cathedral Effect that we present as entertainment and therapeutics in Second Life are conceivably Linden Labs' property if we present them in Second Life.  We didn't see this until today, and it wasn't presented to users in any prominent way.  Please consider any presentations we've done since the change in TOS as lacking due notice.

This is heinous and contrary to every aspect of creator centered culture that #lindenlab  and #secondlife  has promoted, and if you don't pull back on this policy I'm going to actively encourage creators in SL to pull out.

Even if we trusted you (which, frankly, LL has given us reason to not hold perfect trust over the years -- I'll remember the purge that lost us Pathfinder and many other of the Lindens, for example, and gutted support), the company could be sold with our assets as part of the deal and you would have no control over it.

Shava described Oddfellow Studio as having been made "gone pitch dark, with nothing but a notecard giver with this essay on it." She also encouraged other Second Life residents to do the same, telling the Lab, "You really blew it."

She would later make a second post, saying the decision by her and Tuna was a sad one, and one they hoped they could reverse, "We are very much hoping some inexperienced and/or clueless lawyer at LL made a mistake in revising the TOS and it will be revised and we will be able to unpack our stuff back into SL." She, and Tuna on Facebook, stated they would be moving their performance to Inworldz.

There were a number of comments to Shava's second post, including one from Aeonix Aeon, suggesting the ToS change was part of Linden Lab's "long-tail exit strategy for Second Life as a product/service. That doesn't mean I think Second Life is going to shut down tomorrow, but what it looks like is that they are circling the wagons and preparing the lifeboats." There was also a long thread posted in the official forums (Click Here).

The "Odd Ball" has been a one of a kind performance in Second Life, run by Tuna Oddfellow and Shava Suntzu. It's been described in many ways from dancing in a kaleidoscope to a psychedelic trip without the drugs. After several years of wowing both regulars and people just finding out about it, the show is coming to an end in Second Life. Perhaps that will change if Linden Lab changes the controversial part of it's Terms of Service back.