Remembering Ktadhn At The Seanchai Library 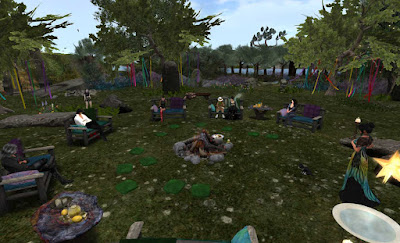 Yesterday at the Seanchai Library in The Glen, there was a small service for the late Ktadhn Vesuvino, who passed away earlier this month. It was at 1:30PM SL time, with Cale (Caledonia Skytower) as the host of the event.

REMEMBERING KTADHN for those who wished to participate in a community remembrance and have not had the opportunity to do so. Caledonia presents a final honoring of Ktadhn Vesuvino, and you are welcome to contribute your memories and honors in local chat  ~  Seanchai Library in The Glen - Live in on Stream..  Nowhereville (198,130,21)
A number of people showed up, including Wildstar Beaumont. Much of Cale's discussion was on the land stream. In text, she shared some of Ktadhn's amusing comments over time. She would say of him, "I've never known anyone who so dilligiently re-wrote and devised." Fayleen Bellios would say, "He has been a part of our Wednesday night Stories With Friends for at least 2 years, if not longer.   He wrote every week on  his story of Kintor.  We will all miss his on going tale." Trinny Mizin added, "Yet he did it in an hour, probably not to his complete liking."
There were a few other events for KT as he was often called earlier. This is likely to be one of the last ones, if not the last.
Rest in Peace
Bixyl Shuftan
Posted by Bixyl Shuftan at 6:02 AM