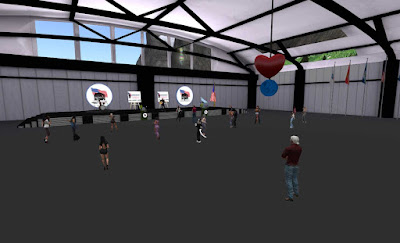 On Wednesday August 3, Veterans Isle was the scene of a benefit concert. The event had several live performers and one DJ. It took place from 4 to 9 PM SL time (Midnight EST). The fundraiser was organized in part by Frets Nirvana, and raised money for the Homes For Our Troops charity.

"Folks ....Homes For Our Troops is 4 star charity according to Charity Navigator are considered a top rated Veteran and Military Charity," he would call out at times to remind the audience, "Nearly 90 cents of every dollar donated to HFOT goes directly towards the program!  This is incredible.  The industry standard says if you can find a charity 65 cents or above that is good."
Homes For Our Troops is a charity that builds and remodels homes for disabled American veterans, particularly those who served in the recent Iraq and Afghanistan conflicts. As Frets put it, "The HFOT Mission: to build and donate specially adapted custom homes for severely injured Veterans post-9/11 enabling them to rebuild their lives."
Usually the event is held on the last Sunday of the month. But Frets wanted to know if a Wednesday event would mean more people showing up.

The schedule was for DJ Snowpaw to start things at 4PM, Mavenn to take the stage at 5, James Olmos started his music at 6, Greg Ellis Toronto's turn at 7PM, and last but not least Hogan Baley at 8PM.
As the performers entertained the crowd, people would donate money to two house-shaped kiosk on either side of the stage. Occasionally Frets would challenge the crowd to add in more, "31k in donations now, next target is 40k. Here is my challenge, hit that 40k and I will put in another 2500 Linden."
At the end of the event, a total of 95,050 Linden dollars had been raised in both kiosks.
To learn more about Homes for Our Troops, check https://www.hfotusa.org .
Bixyl Shuftan
Posted by Bixyl Shuftan at 10:15 AM