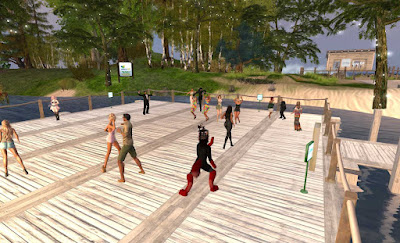 Tuesday was the real-life birthday of Nuala Maracus, a noted Relayer. And Trader Whiplash threw a "surprise party" for her at his "Legends" club. A number of Relayers showed up, or in one case, sending his alt. As it turned out, the birthday girl herself did the DJing. 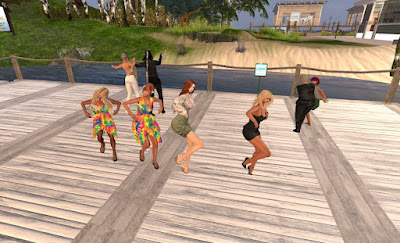 A number of "Roos With a Dream" showed up, though without their characteristic Outback gear.
There was a little talk about a corvette in the area, Arizona Ballinger saying, "It is equipped with a cam so Fuzz can't drive it." Trader mused, "I leave it there to tease Fuzz. ... After Arizona dumped the ice from the zamboni on the biker gangs, it was suggested NOT to ride it on the track anymore." Arizona chuckled, "They were not a happy group." Lady Ren 'Jinx' Flow (Ren Float) joked, "Just tell them 'Chill!'"
Happy Rezzday Nuala.
Bixyl Shuftan (and Rezzdammit)
Posted by Bixyl Shuftan at 6:01 AM