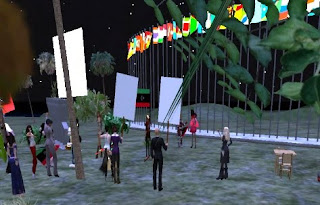 A sizable demonstration against Libyan dictator Kadaffi took place in Second Life today. Taking place in front of a replica of the UN building, the crowd spoke out against the reported slaugther of civilians by mercenary troops hired by the strongman.

"There was about 50 people or so here about 3pm," Second Life Newser was told by demonstrator Suzy Honey, "people from all over the world, Europeans, Japanese, Arabs." Another of the group, Ms Qunhua, mentioned there would be another protest Tuesday at 10AM SL time.

For the past 24 hours, Kadaffi's position of power has been steadily deteriorating in this latest Middle Eastern nation hit by waves of unrest. The second largest city is reportedly in the hands of protesters. Two Libyan jets landed in Malta and defected, saying they were ordered to fire on civilians. Kadaffi's son warned on the radio that he and his father would not be stepping down like the leaders in Tunisia and Egypt, and threatened thousands would die. Kadaffi himself has reportedly left the capital of Tripoli, his current whereabouts unknown. The number of dead is supposedly in the hundreds at least.

More about the protests can be read in CNN articles by Janey Bracken and Nadia Lane.