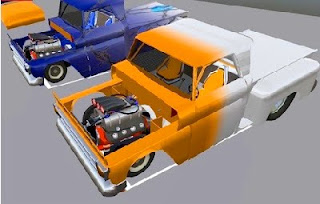 Drag Racing Rocks Second Life With Blinding Speeds! Only the rules limit speeds to 450 MPH, Second Life (SL) drag racers are burning rubber and making tracks! Yes they CAN get out of Denver baby! Woooooooosh!

SL hockey legend, Antonia Foggarty, does SL wrestling and SL drag racing. She invited me to her motorsports factory to view her newest creations, a pair of steps-on trucks with Hemi-modified engines (Picture 1). Sweet!

In Picture 2, Antonia models her pro-sports driver outfit in front of a cherry Plymouth dragster titled Sox and Martin. She explained that it's quite unusual to put Ford parts in a GM car! Oh really!

At Antonia's invitation, I headed out to the drag strip to catch some car thrills. Everyone was just wonderful, excited that I was writing this story! Dragstrip announcer MB Robonaught even made an official proclamation to the audience, announcing my iReporter presence! Hurray!

Racer Rocky Belavidorico explains, "SL Drag racing is a great stay at home hobby .. modifying the cars... the competition is excellent and there are many great racers." 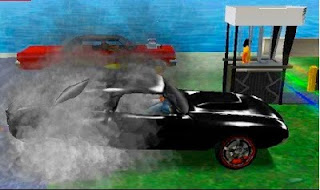 Picture 3 is a burn out, sending up plumes of smoke as drivers heat up their tires to stick to the road. At the pre-start countdown, we saw a very convincing deterrent to jumping the gun! Then it's GO TIME! Pedal to the metal baby! In a heartbeat POOF, the cars are gone! But they come back right quick, because each race is best 2 out of 3 heats.

How they reach 450 MPH in under 250 meters boggles the mind! Real world dragsters reach up to 350 MPH in 1000 meter races. That means SL dragsters accelerate at least 4X as fast!

Just before driving out on the track SeVeN VanDouser told me, "To me it's one of the most interactive drag racing simulations... having done it in real life and now only in the SL world, it keeps the dream alive." Awesome!

The amazing Antonia Foggarty appears in my hockey report: Click Here to read.