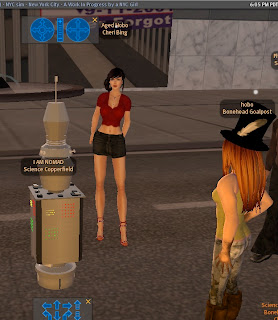 It was September 11, 2007 when I ran into Cheri Bing, and her New York City Block. Part of another sim at the time, she later got a sim of her own for it: NYC. A resident of Brooklyn, Cheri wanted to recreate the place where she grew up, as well as building a monument to the World Center Trade Center towers.

In 2009 and 2010, the NYC sim hosted memorial events on September 11 that drew great crowds. The one on 2009 drew the attention of CNN. the 2010 event drew the attention of firefighter groups reported to have real-life firefighters from New York City. Shortly after that, I didn’t notice Cheri coming online. And it wasn’t until weeks later that I saw her. She told me she might not be able to keep up the tier on the sim. 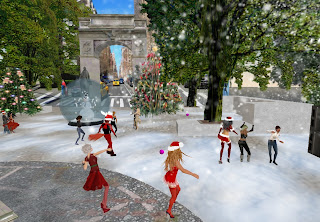 Thinking about the place the other day, I decided to take a peek. But my LMs would not work, “no information available.” And checking the map, there was no NYC sim.

Hopefully Cheri’s problems are temporary. But more often than not, this means the permanent end of a sim.

The NYC was a good sim, with its memorial, a small photography museum, a small number of residents who called its apartment complexes home, and a few shops. In 2010, police and firefighter groups moved in to call the sim home.

I did manage to get in contact with JayFizzle McGinnis of the Second Life Fire Department. He explained that the group had left the NYC sim later in September after the 9-11 ceremony, saying the sim wasn’t set up for roleplay very well, “she wasn't able to accommodate, so we had to make a move ... and it pans out it was a good one ... “

Although there are other New York sims, this was one that had a kind of native charm. It will be missed.