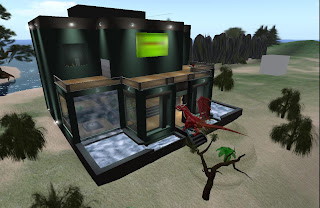 The Podex Exchange at Moonbeam has gotten some odd customers, but this week they got an unusual client: a huge red dragon.

It's not known where the scaled creature came from. It flew in from the sky, and touched down in front of the building, managing to squeeze in through the front door. With a lumbering gait, it headed to the counter toward the nervous clerks, puffs of smoke coming from its nostrils. 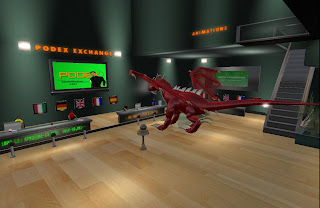 So how many Lindens did the dragon want? The clerk whom dealt with the dragon was a little too shaken to speak. But one of the others told that the dragon was at first interested in trading ingots of iron for gold. The clerk explained that Podex did not deal with gold, but was a place where one could buy or sell Linden dollars with US dollars or several other world currencies. The dragon then handed over an undisclosed amount of Lindens, making a comment about some knight giving them to him along with the armor then running away screaming. The dragon chose to exchange them for one of real-life world currencies, saying it would buy some gold later.

The dragon then turned, it's massive tail barely missing whacking the clerk, and left the building the same way it came in, taking flight once outside.