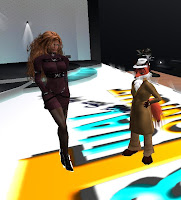 On Sunday at 8 PM SL time, I was at the set of the Virtual Tonight talk show at the invitation of hostess Sam Nightfire for an interview. Of the several guests, I was first.

The interview went well. I probably could have done a slightly better job, but at least my “voice for newspapers” didn’t trip and stammer. The questions about the paper varied from how did I get my start, to what do we usually write about, to can readers also submit things for the paper to publish, and others.

Besides myself, Sam had several others on the show, from fashion expert and host Tempest Hennesy, to Thinkerer Melville, a "retired Professor of Psychology, community advocate and promoter of virtual worlds," to stand-up comedian Elron Priestman, whom he and I traded witty comments in group chat, and a KISS tribute band from Canuck entertainment. While not a KISS fan, I have to say the musicians put quite a bit of effort into their performance.

I saw a few friends of mine in the audience, and a few friends of theirs. Thank you for coming. For those who didn’t , Sam told me the show should be on the Virtual World Network Website (http://www.virtualworldnetwork.tv/) by Monday February 14th.

If Sam seems familiar to regular readers, she should. A few months ago, she came to me having heard about the paper, and was interested in helping out. It was soon obvious that she was someone with both confidence and a good head on her shoulders with business sense. She already had a job with real-life media, but considered it important that there were thriving outlets in Second Life, and was willing to help out. She did for a while, but her talents were discovered by the Virtual World Network. We parted on good terms, remaining friends.

Had she stayed, she probably would have soon become the editor.

Virtual Tonight is still a new show, with a new crew learning the ropes and the routine. But Sam picked a group with talent. It won’t be long before their ratings start giving Paisley Beebe’s “Tonight Live,” a serious run for it’s money.

Sam also posts regularly on Facebook, never at a loss for a witty comment, and has a lively group of friends. Those checking her out there may see a few of my replies.