DJ and club owner Nydia Tungsten now has a new title, radio station owner. She calls it KVXN Vixen Radio, and it can be heard at her clubs or on the Internet. 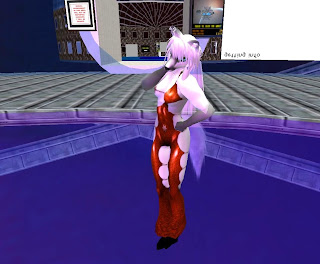 Nydia told Second Life Newser she had first got the idea when, “I had finished a marathon set of 8 hours and told Rita (Rita Mariner the Sunweaver Estate owner) would just let the stream go, and she told me ‘go ahead, hardly any of the radio tabs work anyways.’ And I started thinking since I stream to my parcels almost 24/7 anyways, might as well call it a radio station.”

“I had forgot about it until a few days ago when I was with some friends and it came up (in conversation), and we began throwing out funny slogans, like ‘KVXN Vixen radio...Rita's other white meat.’ Daan (Daaneth Kivioq, a leader of the “Passionate Redheads” RFL team) was throughing them out so you KNOW some were off the wall, ‘KVXN Vixen radio...we may not be better than sex......but it's hella foreplay.’ “

“Soo the other day, I decided to go ahead and do it. If it does well, I will get a larger stream. ... I have a few people listening right now. I have a little bit of everything.” She told me her listeners were all at the Cutlass club for the moment, who wanted 80’s music, so the majority of her tunes at the moment were from the 80’s. Besides Nydia’s venues, residents of the Sunweaver Estates, have started tuning their private homes to her stream. Nydia says she may also put up a few ads in the near future, though they'll need to be catchy and entertaining themselves to hold the audience.

For those who want to hear Vixen Radio outside Nydia’s places, there is a KVXN group one can join for the stream URL, or just bookmark it here: http://www.st-media.ca:8110/

It should be noted Nydia is sometimes known as DJ “Naughty” Nydia as some of her music can be a bit riskee at certain times, “KVXN Vixen Radio where the random tunes are ..... random.”