As the turmoil goes on in Egypt in real-life, there have been some more developments at the Egypt sim. Stopping by Thursday, the place was much more quiet than it had been the previous day, with fewer avatars and much less chatter. There were also a number of signs that were supportive of Egyptian leader Mubarak, as well as a few avatars wearing tags supporting him. There was also one sign with a picture of a blindfold over the Statue of Liberty "The Big Lie." 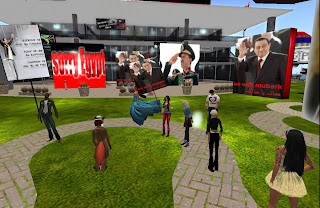 People continued to drop by and express there support for Egypt, one woman telling me she had a good friend from the country, "I love Egypt, and all my friends from Egypt." There was much less debate on the protests, someone telling me a number of people had been banned from the sim. I saw Ammroty Aedipo the sim, owner, but he appeared to be away from his keyboard. Seeing him log off, I sent him a notecard, but it went unanswered. I saw him the following day, but he was busy chatting with someone.

Dropping by briefly on Friday, the crowd was a little larger and the chatter a little more active, but the talk was often on subjects other than Egypt, such as US President Obama's domestic policies. One resident did express curiosity about some people apparently changing sides on the issue of Mubarak.

Back in real-life Egypt, Thursday saw much fighting as pro-government groups attacked anti-government protesters. Reporters found themselves under attack too, subject to rock throwing and beatings, and authorities began ordering journalists confined to their motels. Some observers feared this was a sign of loyalist forces about to do something really bad. But Friday's largest demonstrations have apparently gone peacefully, pictures showing some from opposing sides shaking hands and dancing.

What happens next in Egypt is anyone's guess, but no doubt the Egypt sim will continue to be a place of activity and debate for as long as the situation goes on.