This week after a short tryout peroid, the new beta Version 2 viewer with an optional simpler basic mode was not only made official, it was made the default download for new users.

Since the initial launch last week, we’ve also deployed an additional beta version with fewer bugs and more stability and performance improvements. ... we are releasing the SL Viewer into general availability and it is now the default download for new users. A few new features that are included are the destinations guide which allows rapid access to selected areas around SL for new users by interest, the ability to change avatars quickly and “click to walk.” Just click on a point ahead of you and your avatar will automatically start walking there. Additionally, we encourage you to fill in your “Interests” in the Edit Profile tab of your Profile page. Eventually, you’ll see that we are going to do some fun things with Interests once more people fill them in. Keep in mind, that we’re just at the beginning of developing the Basic experience for new customers and that we will continue to improve it, and add features, as time goes on.


To me, the new viewer seems to have a rather rapid approval process. And I wasn’t alone. Tateru Nino on her blog stated it went from beta to official in eleven days, “Mind you, only seven of those eleven days were working days.” From alpha to beta was even faster, one day. She questioned if the Lindens actually took the time to listen to residents, pointing out that the new viewer “does not actually work – at least not from where I’m sitting. It’s the only viewer that Linden Lab has put out in my memory that fell at the starting gate.” She later stated she was messaged by Rod Humble himself, saying they were working on the problem, and it would be fixed soon.

Hamlet Au’s article reminded readers of the basic viewer’s “point and click” movement and “instant avatar selection” from a number of newbie avs. His attention was also drawn to the “Profile Completeness” progress bar, “To reach 100% completion in your Second Life profile, you have to add some interesting details: Specially, your Real Life Biography.” Hamlet Au called this a “necessary nudge” to make Second Life more appealing to the mass market, feeling “avatar-only identities have made Second Life niche.” Personally I disagree for a number of reasons, but this is for another column. 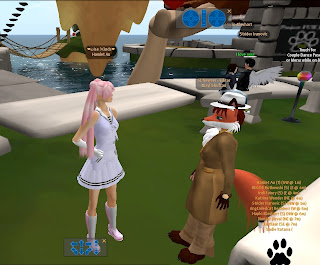 Much to my surprise, Hamlet Au personally showed me he’d been having troubles too with the new viewer. During the fundraiser for the Japanese Red Cross at Madpea, I teleported in to see how it was going. I soon noticed an Asian schoolgirl av appear next to me with an anime “meatball” hairdo. Then I saw the name: “she” was Hamlet! After both of us recovered from our mutual surprise at seeing each other like this, Hamlet told me while checking out the basic viewer, he had gotten stuck in the girl avie, and couldn’t change out of this embarrassing gender-bender that got chuckles from both the Madpea audience and competing online newspaper editor alike. It was an "only in Second Life" moment that I'll be thinking of for a while.

Checking the feedback on the forum, comments were mixed, probably mostly negative. One wondered if this was an attempt to keep griefers from making alt accounts too quickly. One of the minority who approved thought a newcomer could learn the basics of Second Life in ten minutes.

And for myself, like other versions of Viewer 2 in recent months, this won’t work for me at all. This made looking to see what others found my only source of information besides the official Linden statements.