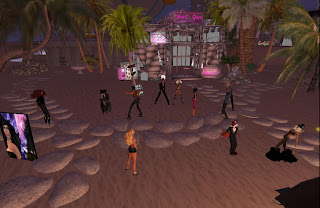 Late last night, dropped in on the Grand Opening party at Savannah's Oasis. While not jam-packed, Savannah told me that a number of people dropped by during the day, saying they wouldn't be able to make it, and wished her well.

There was much funnery about, one of the guys prancing for the girls in a dance cage, and then Savannah herself doing the same for the males. Despite the party advertised as "clothing optional," people mostly behaved themselves and kept them on ... mostly. At a couple times, the store caught fire. Fortunately for the insurers, it was soon put out without damage. Savannah must have expected the party to get pretty wild. 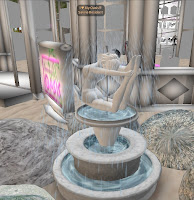 Almost unnoticed next to the store was a statue on a fountain. At first I thought someone was hiding behind it. Then I saw nobody was. The statue itself was an avatar! It was probably an alt that someone managed to have on at the same time as her main, but I didn't ask.

In private earlier, Savannah told me the store wouldn't have gotten off the ground if it wasn't for her best friend Covadonga Writer. Longtime readers may remember Cova as one of our beloved coworkers from Second Life Newspaper. A real-life journalist as well, her articles were imaginative, such as her "SLoop" and SL fiction "Real Life Raider" stories.

Cova told me she'd been quite busy in real life for some time, but should be able to be inworld a little more often. Let's hope she'll be able to share some more of her experiences in print.