Last year, Shockwave Yareach created an “Alien Egg Hunt” maze game for Easter. This year, it’s back again, along with it’s danger at every turn.

For this Easter, the sci-fi horror themed game, unlikely as it sounds, is back under the Passionate Redheads Relay For LIfe team, “The Passionate Redheads proudly present our annual egg hunt maze, with a twist - In Space EGG HUNTS YOU!! That’s right, these ain’t no ordinary eggs. They are ALIEN eggs. And you’re not collecting them, you’re shooting them!” 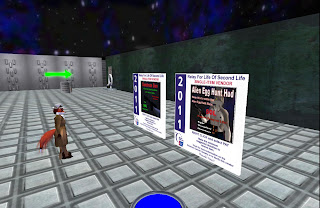 In an adventure worthy of the movie “Alien,” your objective, survive the trip through the maze, blasting any eggs, crawlers, and monsters you come across. If a facehugger ends up on you before you blast it, you’ll have to start all over again. Blast 16 eggs, and you win.

Before going past the start of the maze, one needs two things. One is the HUD provided for 50L at the start of the maze by paying the RFL vendor for them. It keeps track of the eggs, crawlers, and monsters shot. You’ll also need a gun of some kind. Because of the huge variety of personal firepower in Second Life, even when limited to free weapons, Shockwave has a test egg out in front of the maze as a test. If a gun works on the egg, it will work in the maze. There’s also a RFL gun vendor next to the HUD vendor. 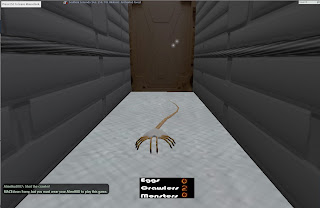 Going into the maze, one has to be careful of the eggs and monsters. Get too close to an egg or a crawler that hasn’t been blasted, what ends up on your face is not egg yolk, and you have to begin again. Not knowing what’s around each and every corner, as well as the occasional steam clouds that may help hide a monster until it’s too late, it makes for an unnerving feeling one gets inside the maze. Multiple players can be in the maze, but no harassment is permitted by one player on another (monsters are another story).

Following the blasting of the 16th egg, the player has won, and the maze will announce your time. Prizes will be awarded for the best five times. The hunt will run at least to Easter, possibly longer.