And It's Obama, Again 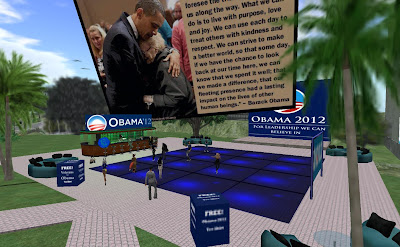 Last night, Second Life residents watched the election returns not only on TV, but also got together at locations like the GOP HQ, Cafe Wellstone, and Obama HQ. It was just after 8PM SL time in which the winner was declared. President Barrack Obama had won, overcoming a weak economy with an unemployment rate that would have brought down previous incumbents.

Stay tuned for an in-depth look at election night on the Grid.
Posted by Bixyl Shuftan at 6:04 AM