It's been almost two years since Ozimals, the creators of the breedable bunny that was all the rage in Second Life for a time, ended up in court against Amaretto, known for it's horses that remain popular today. For those who don't remember, the trouble began in December 2010 when Ozimals filed a DMCA against Amaretto saying the scripts for Amaretto horses resembled those of Ozimals bunnies, and Amaretto responded with a counter-DMCA and copyright lawsuit. Later, the judge issued a temporary restraining order on Linden Lab against issuing a DMCA on Amaretto. The following month, he “granted an injunction that only applies to Ozimals' sending of takedown notices and makes no reference to restrictions on Second Life.”

The "bunneh versus horsie" lawsuit, which besides being a real life case involving virtual goods had the distinction of being presided by Charles R. Breyer, the brother of a Supreme Court Justice Stephen Breyer (Hamlet Au mused that there's likely to be a few jokes about the case in family conversation over the Holidays). Following the injunction in January 2011, nothing was heard about the case until this month. Tateru Nino reported that on November 5th, Judge Breyer made a summary judgement on the case.


Amaretto claims the ruling as a victory for them, posting the "ruling vindicates Amaretto and permanently prevents Ozimals from asserting its previously claimed copyright on Amaretto or any other entity." There has been no comment on the Ozimals blog. 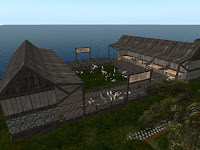 Hamlet Au's article on the case got number of comments, including one by Pussycat Catnip, whom remarked, "Summary judgements are ultra rare. They only occur when the situation is so obvious, the court finds there is no need for a trial. That's something Courts normally cannot Constitutionally do. To get one, the other side has to have essentially conceded the floor. ... whatever evidence was put forth, was deemed worthless."

It seems that this case is all but over, Tateru thinking, "it doesn’t look like Judge Breyer is going to have all that much left to rule on to finalize this case. It may drag on a little longer, but not that much longer ..." The general opinion on the Grid seems to have been that Ozimals had started the mess to begin with due to its market crash after months of being wildly popular, and went after the new top breedable pet by trying to use the power of the Lindens.

Hamlet Au thought that this case would establish a precedent for similar cases. Though this was a case in which the evidence was "worthless." One in which the accuser has a more solid claim is likely to go in it's own direction.