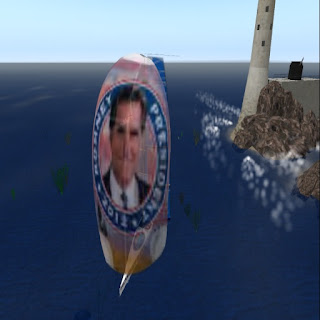 On Monday while boating on the Blake Sea in the Mizzen sim, Gemma Cleanslate got a reminder of what season it was. She spotted another boat heading her way, and as it got closer, she noticed a certain someone's picture on the sail: the Republican candidate for US President, Mitt Romney. The boat itself had no one aboard. Scripts made it go automatically on it's course, as a floating billboard for the election.

Second Life Newser will not endorse either candidate for office. What we do ask is that people get out and do their civic duty and vote.

For those wishing to discuss the election in Second Life, one can go to the hangout for Democrats/liberals and progressives at Cafe Wellstone in the mainland Pini sim (56, 78, 45) , or the meeting area for Republicans/conservatives at The Republican Party of SL Headquarters in the Sunset River sim (180, 198, 23).

Go out and go vote.