In the Tardis sim, there's an exhibition of the Guy Fawkes Gunpowder Plot. 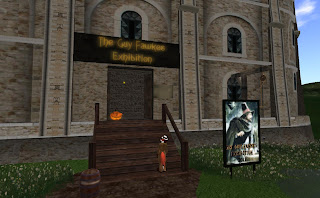 Experience the dark history behind one of England's longest traditions, the burning of Guy Fawkes effigies on November 5th. The Guy Fawkes exhibition will take you step by step on a true story of a plot to destroy the very establishment of England, and the truth behind the man considered the culprit. With freebies and interactive props, this Exhibition is not to be missed!

A notecard at the entrance reccomends you set your view to midnight to get the best effect. Most of the show is in the main exhibition room in the center of the place. "On your way back out, don't forget the freebies."


Remember Remember the fifth of November

The gunpowder treason and plot

I see no reason why gunpowder treason

should ever be forgot

to blow up king and parliament

Three score barrels were laid below

By God's mercy he was catched

with a dark lantern and lighted match

Holler boys Holler boys God save the King
Posted by Bixyl Shuftan at 6:01 AM