In her blog, Second Life artist Bryn Oh announced her popular exhibition "Virginia Alone" would soon be closing. She is working on a new exhibit, and In order to finish and build it on her Immersiva sim she has to make room available. So to make room for the new, the older "Virginia" house will be removed. 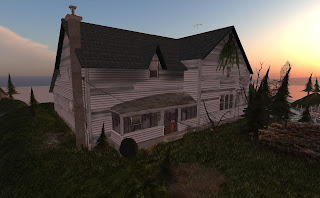 I am working on a new build called Imogen and the Pigeons which requires me to delete Virginia Alone as I have just about run out of prims. I am going to leave it up until December 1st. Time flies and I still have a few more projects I would like to accomplish on Immersiva. ...  I would like to thank everyone who sent kind messages to Virgina through me. When I went to visit her she was really touched that people from around the world, whom she didn't know, would send her good wishes.

"Virginia Alone" was made in June, and since then has gotten rave reviews from the critics, and thousands of visits from residents. The exhibit is about a lone, blind, elderly lady in her house dealing with bouts of schizophrenia, knowing something's wrong with her but not exactly what. Health advocates have talked about the exhibition as well as art critics, saying it's helped remind residents of mental illness.

Source: Bryn Oh
Posted by Bixyl Shuftan at 6:05 AM