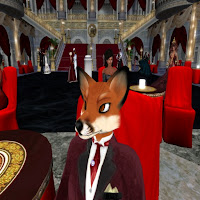 In the aftermath of Hurricane Sandy, a number in the area hit by the storm are still unable to access the Internet, sometimes from lack of power. Among them, Grease Coakes, who emailed us from a library, saying he still didn't have Internet at his house.

On another note, Xymbers Slade, whom has been taking a break, recently informed SL Newser that some real life problems have come up that will demand his full attention for some time. So he has been given an indefinite leave of absence.

Hopefully both will be able to write again soon.

Both Grease and Xymbers (and others) had tangles with a hurricane last year with Irene.
Posted by Bixyl Shuftan at 6:00 AM