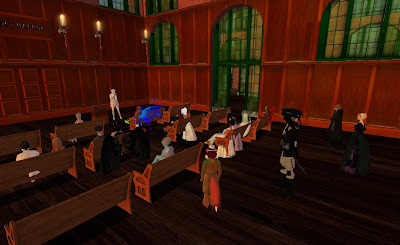 It was last week on August 6 in which the Steampunk community of Steelhead held their mayoral elections. Yesterday at the Steelhead town hall, interim mayor Jimmy Branagh announced the results. Three candidates had run for the office, TotalLunar Eclipse the incumbent, and two challengers, Willow Leafstorm and Jobias Barthelmess. Jobias, whom was involved in an attempted shooting of Steelhead's Sheriff Fuzzball Ortega, was a much criticized candidate at public meetings. Even he himself during the debate admitted he wasn't the most popular of those running.

So imagine the surprise when it was announced at the August 13th town hall meeting that Jobias had won the elections! Timmy, who gave the announcement, was described as worried, "he sounded odd." This led to a lengthy debate among the people at the meeting, and whether or not the votes should be screened for accounts less than a couple weeks old.

Lunar reminded the crowd that while Jobias has been accused of many plots, he had never been convicted of them. When talk turned to tarring and feathering him, Lunar tried to calm them down, "Killing or maiming him would earn you jail time, there is still a law here." He asked that if people insisted on plotting that he be left out of it.

Speaking to Lunar after the meeting, he commented of the results, "I am quite frankly shocked. I have served under another mayor before I will try and keep neutral on my feelings." Willow, who was also there, had this to say, "Yes, I have a statement. There is no way that man, Jobless Brothelmess is taking office on my watch. He is a scoundrel and a criminal. My duty is to protect Steelhead."

As of now, there is no official statement from Jobias. Details are still coming in about this upset election in Steelhead.

(Editor's note: the election results are part of a community roleplay, so expect more twists and turns)