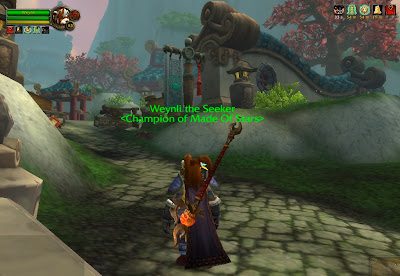 I imagine that's what my Pandaren character would be thinking once she realized where she was. Just the other day I finally reached Level 85, and with it came the questline that led to the expedition to Pandaria. For most other adventurers, they would truly be strangers in a strange land. But for Wen-Li (Weynli), it would be coming to the land her ancestors left centuries ago. A land rejoining the world after thousands of years of isolation with the parting of the mists that once hid it from view, a world divided by a conflict not even the Pandaren from the Wandering Isle could escape from. To help heal the broken world, those adventurers leaving had to chose a side: Alliance or Horde. And now, how to help her ancestral homeland in this time of trial while still fulfilling the obligations to her faction?


She might not have much time as things are starting to get interesting, as the trailer for "Siege of Ogrimmar" suggests (Click Here).