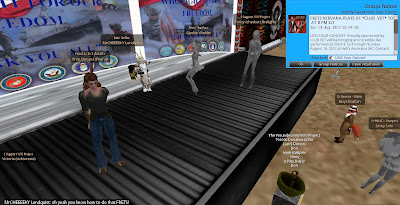 Late this month, the Wounded Warrior Benefit  hosted not just one successful fundraising event, but two. Besides their regular event on the last Sunday of the month at Veteran's Isle, on August 18 the weekend before, there was a performance at Club Vet at "Hells Assassins World MC" in the Brimstone sim. The event by Frets Nirvana went from 6PM to a little past 9PM SL time, and was attended by close to three dozen. The concert itself was on a skybox in the middle of a huge racetrack on the sim. The goal was to raise 65,000 Lindens. Over 70,000 was raised. 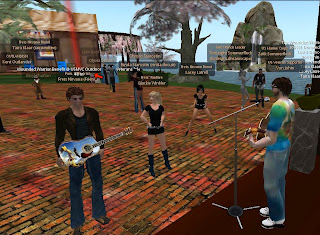 A week later, Frets was back at Veterans Isle with three other musicians. Laidback Celt started things off at 5PM SL time, Shannon Oherlihy played at 6PM , Frets himself got on stage at 7PM, and Von Johin finished off the event from 8 to 9PM (Midnight EST). The crowd was a little smaller, with two dozen in the audience, and 65,000 Lindens were raised.

Frets hopes that Wounded Warriors will raise 13,000 US dollars in Second Life this year.