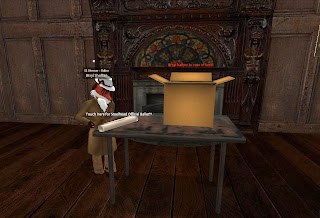 Following Steelhead's weekly town meeting on Tuesday, Interum Mayor Jimmy Branagh declared the polls open. And getting to the place, voting was simple enough, pick up the paper, read the attatched applications of the three candidates for additional information, write down your name and choice of mayor in the respective areas, and drop the paper in the box.

Earlier that day, Jimmy had given his endorsment: for Lunar.

'ello people of Steelhead.  Oy've enjoyed bein' th' Mayor an' awl but tomorrow th' polls open ta select a new permanent toipe Mayor. So make sure ya get yer butt ta th' polls befoe Friday at 9:00 PM when they close.  An' no funny votin' neither. Think Oy won't foind out? As wot will loikely be me foinal official act Oy officially throw me support behoind an' endorse Mr. Lunar ta get back his Mayor's job an' he can be all cushy an' stuff. 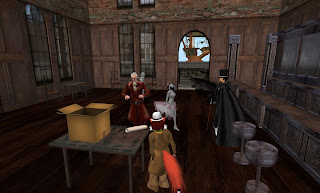 Anyone technically a citizen of Steelhead may vote, not just those living there. But Lunar's concern was about the safety and security of the ballots, "Safe secure voting my arse, its a cardboard box!" Someone else thought even the tape holding the box together looked loose.

I saw a number of people drop in. This included one self-described "timelord" who knew who was going to win, but couldn't say who it was. Jobias Barthelmess (the man in black in the second picture) was there when I showed up, but soon left.

Second Life Newser will not endorse a candidate, but will note that aside from Jobias, the campaign has been a remarkably civil one with a general agreement on most issues and willingess to listen and compromise. And the two leading candidates are remaining friends without an ill word with one another. A remarkable feat for an election that this reporter seldom reads about, let alone encounters.

The polls will be open until Friday, and the winner announced at the next Steelhead community meeting next Tuesday.