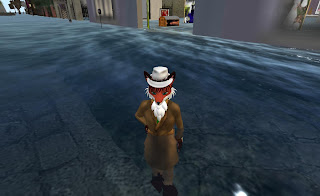 Earlier this week, the sim of New Toulouse, made to look like New Orleans in the early 20th Century, experienced a rare event. The place was hit by a storm and a flood. The water level rose, making walking around a wet experience.

Dropping in on the sim on Sunday, on the streets, the water level had risen a few feet. This meant for a five to six foot tall avatar, they'd  be about waist deep in water. Buildings such as shops had less of a problem, the water level less then a foot. But they still made for a damp shopping experience. Fortunetly there were ways of getting about besides taking a bath. In some places, there were boats available for people to take a copy, rezz on the water, and get on and paddle away. in places there were items floating, such as crates and sections of tree trunk. 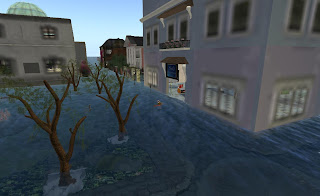 While going about, I came across a talk between Nikita Weyman, a menfolk, and Henri Godenot. Henri is the owner of the New Toulouse and New Toulhouse Bayou sims. The two were discussing something about a Kraken, or rather the lack of one. Henri insisted, "There are no Krakens in the Bayou!" He insisted "the weird noises over by the wrecked cargo ships are caused by settling. "

Henri stated the flood had been caused by a hurricane, "storm cane in on Saturday morning, and appears to be stationary." "The rain started Friday," Nikita told, "but the sky didn't get weird and all my stuff start blowing away until Saturday." She turned to the mayor, "I think my outhouse is floating out toward your houseboat, Mr. G." 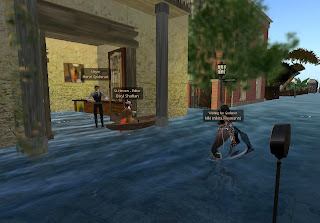 Henri told me evacuation orders had been issued, but "People have been picking up stuff and throwing parties, the evacuation has been a complete failure. in fact I think there are more people here than before the storm." He mentioned there had been some incidents, "The water rises, stuff blows in, weird stuff happens. Like that Sushi Boat Accident by the Bridge." "Sushi boat accident?" I asked, "Sure, Sushi Boat accident, because  THERE ARE NO KRACKENS IN THE BAYOU!!"

More guests arrived and Niki wanted to swim elsewhere, so the rest of us took the conversation indoors. Henri stated hurricanes and floods typical are handled about once a year.It was mentioned a boatload of coffee sank, leading to a few jokes about wide-awake fish.

Before I left, Henri thought the flood would be around for at least two more days. Coming by on Thursday, the flood was gone, and the streets were dry again.

I never did find anything about a Kracken, though.